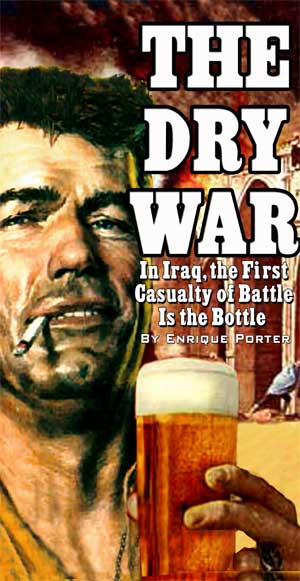 Winston Churchill said the Royal Navy promised nothing to its enlistees but “rum, sodomy, and the lash. ”

If you could stand buggery and arbitrary flogging, you could at least look forward to a mug of hot grog at the end of the day.

In the US military, sodomy and the lash are mostly history, unless you’re stationed at Abu Ghraib. But for the thousands of US soldiers in Iraq and Kuwait, gone too is the consolation of hot rum — or cold vodka, or whatever other cocktail the 120-degree desert heat might demand. Rather than being doled out in rations as a meager thanks for their defense of country, booze is strictly verboten, and for US soldiers all over Mesopotamia a sip of liquor is a first step to a court-martial.

I work on a dry military base in Iraq as a civilian supporting the military, and I can report that prohibition has made criminals of us all. We smuggle, we sell, we steal, we get smashed. We cache alcohol around bases like so many weapons of mass destruction. And at night, we nurse our illegal beers while watching the flashes of firefights and air assaults in the distance. When mortars land nearby, we reach for the next round and toast to the fact that we’re still around to have something to toast to, clean underwear be damned.

But we also drink in fear and in melancholy sympathy. A knock on the door from the military police could mean our jobs — or in the case of those in uniform, their rank, pension, and ability to go home soon to their wives, husbands, and kids.

For the soldiers brave enough to face the horrors of combat but too timid to face the horrors of military justice, the indignities are extreme. After hours in the desert sun under body armor, the chow-halls insult them with massive ice-cold slabs of non-alcoholic beer. It is a credit to our armed forces that these near beers go mostly untouched.

At work here are reasonable precautions – no one wants drunk teenagers manning .50-calibre machine guns – as well as unreasonable ones, such as the wickedly pious dry laws in Muslim host countries. But in practice the prohibition means exquisite torture for the fighting men and women who crave and deserve a stiff drink at day’s end. Making matters worse is the knowledge (repeated with envy as whispered lore among US troops) that in southern Iraq, British soldiers still get a modest ration of ale with their dinners, and the Italians near Nasiriyya can buy cases of beer from their PX. As for the Ukrainians and Poles manning bases south of Baghdad, suffice it to say that their cultures have blessed them with the ability to distill spirits out of the most meager of materials. Place those fine men in the desert with nothing but a palm tree, a folding shovel, and a thimble of sugar, and somehow they will be producing gallons per day of mid-grade vodka before the weekend is through.

What’s left for an American drunkard in Iraq to do? The answer, in short, is to arrange for smuggled liquor, then to pay extortionate prices once it arrives. For a 750ml bottle of Jack Daniel’s couriered in on a convoy, $50 is reasonable. The truckers who bring in the goods are frequently Turkish, and therefore teetotalling Muslims. But they see our desperation, and their pity transcends religion.

Occasionally we can make contact with Iraqi Christians living off the bases. The Christians, who make up a small fraction of Iraq’s population and tend to support the Coalition, swill whiskey as eagerly as any American, and they are proud to sell us hooch. The catch is that fundamentalist Muslim zealots have been firebombing their liquor stores in the cities. (For that reason I would like to imagine that with every defiant sip of Iraqi liquor I am striking a blow for freedom in this benighted country. But even I am not self-congratulatory enough to feel so ennobled by my own drinking.)

The Ukrainian solution – homemade stills – is all but discarded among Americans. In addition to the problem of hiding the still on a base patrolled aggressively for such devices, there is a history of US soldiers’ home-brewing poisonous moonshine in the Middle East. Desperate servicemen during Desert Storm in ultra-dry Saudi Arabia cooked up a methanol-rich potion that blinded a few of them. The Iraqi Christians’ alcohol presents a similar problem, not due to intentional poison but because Arab whiskey is a volatile concoction even at the best of times. Egyptian and Jordanian whiskeys include marks that scream unreliability, such as the cheap look-alike “Johnnie Warker.” Nevertheless, we drink what we can and pray it does not burn us from the inside out, starting with the eyeballs.

There are, of course, pluses to living and drinking outside the law. If you happen to have an alcohol connection, you hold a substance of enormous trade value. US bases crawl with experts in technology, facilities management, and mechanics, and every company has rogue elements more loyal to the sauce than to their own employer’s rules.

Perhaps the worst offenders are the deprived dipsomaniacs at Kellogg, Brown, and Root (KBR), the subsidiary of Dick Cheney’s old company, Halliburton. KBR has personnel all over Iraq, and it has a reputation as the coldest, most unhelpful, most mindlessly rule-bound business in Iraq. All you need to know about Halliburton as a company is that for safety reasons it makes its workers honk twice before putting any car, even a Honda Civic, in reverse. All you need to know about Halliburton employees is that they comply with that requirement.

And so it is a mark of their employees’ fidelity to Lady Gin that they are willing to bend every company rule for a bottle of Tanqueray. I have seen KBR plumbers install thousands of dollars worth of hot water systems in exchange for a bottle of spirits. I have seen KBR drivers behind the wheels of steamrollers and backhoes, working with freakish intensity, doing the bidding of a boozemaster who had dangled the possibility of a twelve-pack before them. Getting caught means getting fired.

Supplying alcohol to the soldiers themselves requires the utmost operational secrecy. No one gets a drop from me unless I’m sure he or she has thought about the consequences of getting caught. Since I rely on soldiers to guard me as I sleep, I have to know that they won’t have any duty in the next day that would affect my security or anyone else’s. And I prefer to drink with them personally at first to make sure they aren’t crazy drunks or stinkingly incapable after the first round. Dehydration and decreased tolerance can make even hulking Marines stumble around giddily, like high school girls after two Zimas.

And each military drinking buddy comes to me only after a discreet and deniable proposal. In an unmistakable tone of jest, I’ll suggest that the soldier visit my tent for a beer. A faint pause before his laugh tells me that he’ll stop by later, hoping against hope, to see if I’m serious. By nightfall we’ll be clinking glasses, waiting for the end of war, carnage, and fifty-buck handles of hooch.