There is enough 150-year-old whiskey resting underground where the old river queen sank to get 130,000 people pie-eyed. It’s worth five million dollars, and it’s still there for the taking.

A neglected treasure is mellowing under the green willows along an old course of the Missouri River in broad, windswept Kansas. Mellowing is the proper word, for the treasure is improving with age. News stories in files of the Kansas City Times state that 16,000 gallons of fine, old Kentucky Bourbon whiskey in stout, 40-gallon oak barrels are buried there. According to experts the complete haul would sell for at least $5,000,000 — and it’s just waiting to be dug up.

These barrels of liquid treasure have been neglected because almost everyone has forgotten about the once-proud river ship, Francis X. Aubrey, and about the exact spot where she sank.

In the latter part of the 1800s, it was sport for river people to watch boats go up and downstream, to tell stories about them in barbershops and saloons. Such a story session in a smoky saloon in quiet Holt. Missouri, fired up a group of citizens.

Over a mug of beer in the saloon, an old river dog reminisced to a motley group about the boats that had run afoul of the dangerous snags that infested the river. As he rambled on, Mayor Gale Henson, of Holt, joined the listeners— along with other prominent citizens. They all listened attentively as he described the wreck of the Aubrey.

Her nine-day trip from St. Louis had been quiet, and her skipper, Captain Dan Able, felt his cargo of wagons, glassware, cloth- ing and some 500 barrels of whiskey was as good as delivered. Then it happened. With-out warning on August 10, 1856, she hit a snag near Parkville that gutted her from stem to stern like an overripe melon. The once-proud Aubrey drifted like a drunken mule-skinner and finally rammed into the bank. All 130 passengers got off safely, and a hurry-up salvage job removed some of the machinery to safety before the ship began to settle. The whiskey, worth only 25 cents a gallon then, was left in the holds in their stout oaken casks.

The Francis X. Aubrey slowly sank deep into the mud across the river from the farm of George Summers. Nothing but her bell-mouthed stacks and superstructure showed above water. Spring floods and moving soil and debris buried the Aubrey deeper. Later, with the rush of high waters, the stacks and superstructure were washed away. Finally, the Missouri tired of the old channel and cut a new one nearly a mile away. Willows crept in to erase all signs of the old riverbed.

Forty years later, in the Holt saloon, treasure fever for the Aubrey pitched high. Mayor Henson and others formed a treasure-hunting organization: the Holt Syndicate. Immediately a runner was dispatched to St .. Louis to check the original shipping book. He returned with cheering news that 400 to 500 barrels of whiskey were aboard the Aubrey when she sank.

Soon Holt Syndicate members began searching for the right place to dig. But they were not alone. There were spectators— farmhands stealing time from their chores, curious citizens of all ages, vagrants, town ne’er-do-wells and an occasional newspaper re-porter from Kansas City or a nearby small town. Always at the front of the spectators was a sun-browned old farmer, who walked with a limp, like one who’d spent a lifetime behind the plow. Seamy face alive with amusement, he watched the Holt Syndicate members beat the brush.

Days went by and tempers grew short. There was usually disagreement as to where to begin excavating. The old farmer, smiling derisively, remarked again and again to any Holt Syndicate man who would listen: “You’ll never find the Aubrey by lookin’ where you’re lookin’ for it.” But the whiskey hunters shrugged him off.

Mayor Henson rigged up a contrivance for sinking an iron rod deep into the mud. With this the men began at the river’s edge and made soundings through the thicket.

The gray old farmer laughed aloud. This was the funniest whiskey hunting method he had ever seen. Mayor Henson flushed. The heckling had gone far enough. He asked the farmer to locate the treasure, if he knew so much. The farmer said he would do just that.

After all, the Aubrey had gone down across the river from the Summers farm. And if he hadn’t seen the Aubrey sink, his name wasn’t George Summers.

The jaw of Mayor Henson jutted forward. “Why didn’t you tell us in the first place?” All the leathery creases of George Summers’ face moved, forming a broad smile. He said simply: “You never asked me.”

When the Holt Syndicate recovered from their mixed anger and shock, members clapped George Summers on the back and pumped his calloused hand. One minute before George Summers had been an unknown Clay County farmer. Now he was Man of the Hour. Mayor Henson asked where the digging should start. George Summers didn’t say another word — not until the Syn-dicate cut him in for full membership.

The whiskey hunters at first thought Summers was being cagey when he said they’d have to go back across the river before he could tell them just exactly where to dig. The whole party crossed with him in a leaky rowboat. On the other side, Silent George harnessed an old mare and headed out to the edge of his farm near the river. Holt Syndi-cate members tagged along, looking ques-tioningly at one another, Had Summers lost his mind?”

“I was plowin’ one day after the Aubrey went down,” he finally explained as he held the reins and directed the horse down the turning row. Suddenly he shouted “whoa” to his mare. “There she is.” He pointed a crooked index finger with a swollen knuckle,

“Many a day like this, I noticed while plowin’ down this turnin’ row, the Aubrey’s stacks showed up right in direct line with the row between the horse’s ears,” he said,

Shortly the Holt Syndicate, including Summers, was at work again. Mayor Henson’s iron rod thumped the sheet iron roof of the Francis X. Aubrey, 32 feet under the mud and a mile from the water’s edge.

With axes they cleared willows and under-brush above the hulk. Mayor Henson made soundings until he found the shape of the boat, which lay at an angle so that part of the deck was 24 feet under the mud and part was 36 feet under. Excitement of the news raced along the river from Atchison and Fort Leavenworth clear to St. Louis.

“They’ve found the Aubrey near Parkville!”

Whiskey dealers thundered in by wagons, dust swirling behind. Bidding for the whiskey started high and shot up. Mayor Henson felt it was worth every cent of the $30 per gallon offered. “After all,” he said. “ It’s real heir-loom whiskey.’’

George Summers shook his head in awe at the bids. Thirty dollars was quite a sum. Why, he remembered his “Sunday suit” had cost him $10, and that was a lot.

Letters of advice on digging river bottoms poured into Holt—letters and revenue agents from dry Kansas. And the small number of spectators became a babbling, shoving horde. With the end in sight, the Holt Syndicate worked by day and by lantern at night. Soon they’d dug a 20 foot square-foot hole that went 16 feet deep, but just as they neared the mark, their luck suddenly changed. A trickle of water began seeping into the hole. Then it began oozing in faster. Soon they were knee deep in sticky quicksand and silt.

One of the whiskey dealers offered them $75,000 for their find. The panting, arm–weary Holt Syndicate members turned down the offer. A half million dollars was within grasp. They took a hurried inventory to see how much they’d already spent. It added up to $2,000. To reach the Aubrey, they needed a complete caisson outfit. Every member put in more money.

On December 8, 1897, they reached the Aubrey’s deck. Their heavy boots thumped on solid structure. This was the finest flooring they’d ever seen—just as good as on the day she’d gone down. Swinging their axes lustily, they hacked until the tough flooring gave. Mayor Henson was first to lower himself into the musty hold. He shouted up to the men peering in. He’d found an old hat—a broad-brimmed, black felt hat of western design—and a barrel. His axe bit into the sturdy wood. It cracked, and old bones rattled on the deck. The barrel was labeled “Hams.”

Everyone was silent. No whiskey. It was plain that they hadn’t hit the main hold. They pulled the caisson sections to the surface, determined to go back to work again. News of the failure traveled back to Holt. Another month’s work would be necessary to sink the caisson a second time.

Again they hit the deck. Again the wood was tough to axe blades. They chopped into something under the deck before seeing that it was the running gear of a wagon. One of them pulled up a wheel. Its red paint was good as new.

Mayor Henson was jubilant. With every-thing so well preserved, the whiskey was bound to be in pristine condition. They went below and found the wagon resting on a pile of lumber. It was good lumber, in fine condition, but who was looking for lumber? The woods were full of it. They would have to try another hold.

Which meant another month of raising and lowering the caisson. But despite the complaints from their wives and the numbing cold that paralyzed their hands, the whiskey hunters worked on.

Once more they struck the deck and found more felt hats, several cases of musty and mildewed leather boots and a variety of household furniture and knickknacks, from chairs and tables to bedroom sets. Again, no whiskey.

It was March and the water was rising; further excavating would be harder, if not impossible, to accomplish now. Frigid winds began blowing across broad and flat Kansas, whipping and biting through the heaviest of winter clothing. With faces and hands chapped raw, the Holt Syndicate members decided to give up “for a time.” After flood season, they’d be back.

The floods came and when they returned, they found green willows sprouting up from the Aubrey’s grave. All traces of their backbreaking work had been erased by the cruel Missouri. Heartbroken, they gave up. The treasure fever drained from them all, as it had from the eager whiskey dealer who had offered $75,000 for the buried whiskey. They never took up their project again.

But each man who’d hunted the whiskey never stopped thinking that one more try might have uncovered the treasure.

Today, as then, those who know about the ship have an occasional flare-up of treasure fever. It is only normal. Will the treasure of the Aubrey ever be recovered? This is a question that only time and the spirit of adventure can answer.

For those with a heart as stout as the Aubrey’s oak whiskey barrels, for those with river savvy, for those with a good bank ac-count, for those who are sporting enough to take a chance, the Queen of the Missouri — the Francis X. Aubrey—is waiting under the willows across from the Park College campus, near Parkville, Missouri.

Perhaps 16,000 gallons of fine old Kentucky bourbon, valued at over $5,000,000, would make a rendezvous with the Queen worth your while. 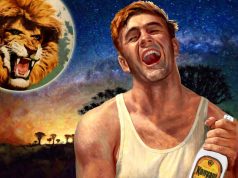 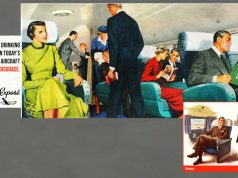 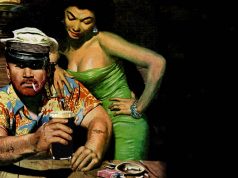 In Dry Dubai They Call Me Guinness Tester!