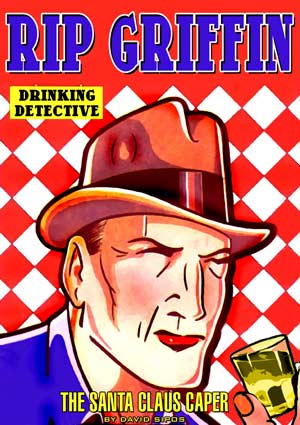 I was sitting at a table in the bar at the Macaroni Castle restaurant in Cherry Creek drinking their signature Dago Red.

It stains your teeth an ugly grayish purple, but that’s a good look for me. My name: Rip Griffin, Private Dick. The hooch at the Macaroni Castle is cheap and good and served under the “honor system” in which a 1.5 liter of wine is left on your table and you tell your server how many glasses you poured. Yeah, right. “In vino veritas,” my ass. I drained the bottle, paid for two glasses, and stepped out into the cold December night. Christmas Eve. It was the last night I had left to catch a legendary serial stick-up man named Santa Claus.

That’s right: Santa Claus. For the last three years starting the day after Thanksgiving and ending on Christmas Eve some punk dressed as St. Nick went on a month-long robbery spree, knocking down liquor stores all over the city. Outside of a few cracked skulls and broken noses he hadn’t hurt anybody yet, but waving a gun around was a sure way to change that. The cops couldn’t touch him with their roadblocks and security cams and so far I hadn’t come close either. But I’d be damned if he was going to come back next year, the white-bearded bastard.
That was why I was in Cherry Creek. Just up University Boulevard sat Bonnie Brae Liquors. Bonnie Brae was a wealthy part of town, so the liquor store would be well stuffed with money that night. And “Santa” had never hit it, kind of like he was saving it for his last night in town.

It was snowing hard as I pulled my ‘65 Rambler into the lot of a 7-Eleven situated just up the street from the liquor store. I parked and watched the yuppies crawl in and out of the liquor store parking lot in their Beamers and Lexi; the kind of people who actually like eggnog. I took a flat pint of Maker’s Mark out of the glove box and had a swig, smiling as the raw whiskey spread through my gullet like a Malibu grass fire. I reached into my pocket for a smoke but didn’t have any. I got out of the Rambler and headed for the 7-Eleven.

I stamped the snow off my shoes and walked up to the counter. The teenage clerk looked like Butthead’s pal Beavis come to life. I stood and looked at him for five or six minutes until he was finished talking on his cell phone.

“A pack of Camel non-filters, please,” I said.

“Which ones are those?” he asked.

“They’re the ones that are Camels without filters,” I told him.

He picked out a pack of Camel Filters and showed it to me. “These?”

“No, the little pack next to those.”

He handed me the pack. I gave him a five and a couple of minutes later he figured out my change and gave it to me.

“Thanks,” I said. I peered at him closely. “Who did that to your face?” I asked him.

“Nobody did nothin’ to my face.”

“Then your mother should be arrested,” I said. “Merry Christmas.”

I turned to leave and almost tripped over a little guy standing in line behind me. At first I thought he was a kid, but then he looked up at me with a scowl on his wrinkled, old man’s face. “Watch where the fuck you’re walkin’, he said with a vaguely Scandinavian accent, threatening me with a quart of 2% milk.

I went out, got in my car and lit a cigarette. There was something weird about that little guy, but I couldn’t put my finger on it. I uncorked the Maker’s Mark and had another slug. The little guy came out of the store and headed up University toward the liquor store, swinging his bag of milk and cookies. Milk and cookies? A Roman Candle went off inside my head. I put the bourbon away and quietly got out of my car and followed the elfish figure up the street.

I waited a few minutes after the little guy went into the liquor store and then crept up and peeked in the window. A smallish fat man wearing wire-rimmed glasses, a long white beard and red suit trimmed with white fur nervously pointed a silver Colt Peacemaker at the store clerk while the little guy loaded cash from the registers into the 7-Eleven bag. I slipped my own Beretta out of my belt and crashed in through the door. “Santa!” I called out. “I thought it was better to give than to receive.”

Santa turned toward me, his eyes wide with fright. He had the Colt pointed at me. “Things are tough all over,” he said. I slowly raised my Beretta and took a bead on his button nose. “Please, don’t shoot!” he cried. “Think of the children!”

“What the hell is that supposed to mean?” I asked.
Before I could get an answer I was on the floor writhing in pain. The little guy had sneaked around the counter and whacked me in the shin with a bottle of Dewar’s. I forced myself to stand and spotted the two perps scrambling for the back door. I shouted for them to stop but they kept on for the door.

I fired a shot. Santa spun around, dropping his pistol and grabbing his shoulder. He stared at me with a mixture of surprise and accusation in his eyes. The little guy shoved him out the door. I ran after them, plunged out the back door, and skidded to a stop in the still-falling snow. Nothing. Nobody was around. I ran to the alley. Nothing. Nothing but two thin tracks in the snow and what I will swear to this day sounded like the faint tinkling of sleigh bells. I shook my head and wondered what the fuck just happened. I went back into the liquor store to call the cops. The Colt Peacemaker still lay in the aisle. I picked up the gun: it was just a toy.

Later that night I sat in the Brewery Bar II on Kalamath with a bottle of Bohemia, a shot of Casadores tequila and my friend Angelique the bartender.

“You heard the story. What do you think?”

“I’d say that if bad karma is stored in a bucket, yours just overflowed.”

I drank my shot and asked for another knowing full well she was right. And to all a good night.